G-aminobutyric acid (GABA) is the primary inhibitory neurotransmitter in the mammalian central nervous system (CNS). Fast inhibitory synaptic transmission is mediated by GABA type A (GABAA) receptors that are enriched at functionally diverse synapses via mechanisms that remain unclear.

The GABAA receptor is a that is selectively permeable to chloride ions (Cl−). It is a hetero-pentameric GABA-gated Cl− channel that depending on the membrane potential (i.e the concentration of ions on the outside and inside of the cell) is permeable to Cl− when ligands bind to the receptor (figure 1). 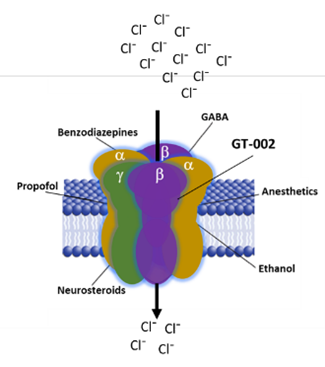 Schematic illustration of the GABAA receptor, which is a hetero-pentameric GABA-gated chloride channel consisting of five subunits forming six main classes: a, b, g, d, e, and r, with the subclasses a (1–6), b (1–3), g (1–3), d, e, q, p, and r (1–3). This gives an estimated +800 different GABAA receptor subtypes in the human brain.

GABAA receptors are important in the regulation of responsiveness and excitability in human cortical networks and in the synchronization of cortical neuronal signaling activity by networks of cortical interneurons.

The ubiquity of the GABAA receptor system in the CNS gives this receptor system a central role in a wide range of physiological and biochemical processes. GABAA receptors are involved in the regulation of cognition, memory, learning, motor function, circadian rhythms, neural development, and adult neurogenesis.

The contribution of GABAergic dysfunction to disorders such as Alzheimer’s disease (AD), major depressive disorder, anxiety, autism, schizophrenia, and bipolar disorder is suspected, with many lines of evidence pointing to an underlying contribution of GABA signaling system and a disturbance in the inhibitory/excitatory balance in the brain.

We use cookies. By continuing to use the site, you agree to the use of cookies. Read more.